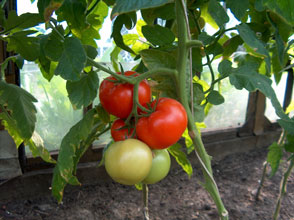 The QEnergySpa, BEFE is the original Bio-Electric Field Enhancement (B.E.F.E.) device developed in 1996, the very first to appear on the market worldwide and is the unit upon which all other copies are based.

The concept behind the QEnergySpa, B.E.F.E. is very simple as are the most profound things. Water being the most essential substance necessary for life (containing electrical patterns and memory); with contact of the bio-energized water, one can expect realignment, balance and vitalisation of the cells of all living things.

Illustrated below is the Tomato Trial performed and written by Paul Cohen, Harvest Haven Health and reproduced here with permission. This was executed to determine if there was indeed a life enhancing effect from the QEnergySpa, BEFE as anticipated. The test was carried out with the QEnergySpa, BEFE, a control and one of the ‘better’ attempted copies whose name has been obscured for legal reasons. It would be fair to assume that other copies would fare worse, than seen in this experiment.

In this climate of muddied waters, both literally and symbolically, it is hoped that a simple experiment could show whether there is, in reality, the life-enhancing effect the inventor intended with the QEnergySpa, BEFE and if the attempted copies were also achieving the same effect..

With this goal in mind, on September 13, 2007, we tested our QEnergySpa, BEFE against an attempted copy using two sets of tomatoes, one conventionally grown and the other organic, all store bought, of similar ripeness and size. (Conventional means grown with the use of artificial fertilizers and chemical pesticides and herbicides, as opposed to organic which prohibits the use of these and depending on the standards applied, engages more holistic methods of soil management.)

We proceeded to treat one tomato of each kind (conventional and organic) on the respective machines in identical quantities of water from the same source, for the standard treatment session of 35 minutes, with a control tomato that was simply placed in a different container of water for the same amount of time. We took certain precautions, such as adequate separation of test units, to ensure the results would be untainted. We then took the tomatoes home and put them in a place where they would remain undisturbed, taking pictures at intervals to record progression (or regression, depending on how you look at it).

The purposes of this test were to:

Now that the stage has been set, may we have a drum roll as we present the results?

You can see all the tomatoes look good, although with minor blemishes on most of them. 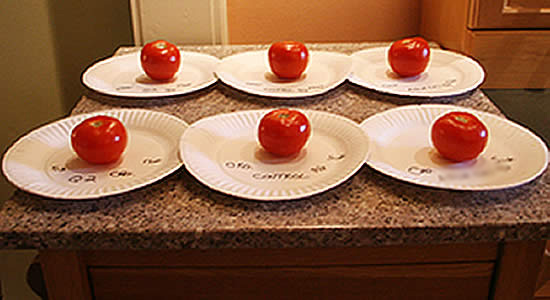 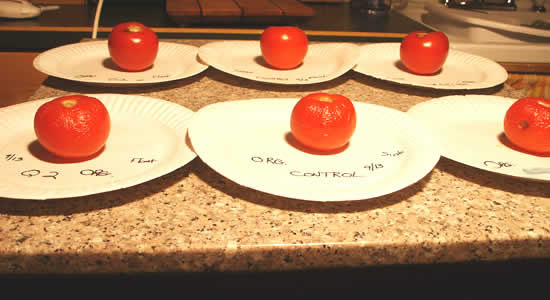 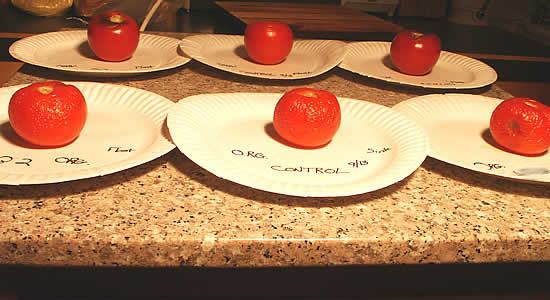 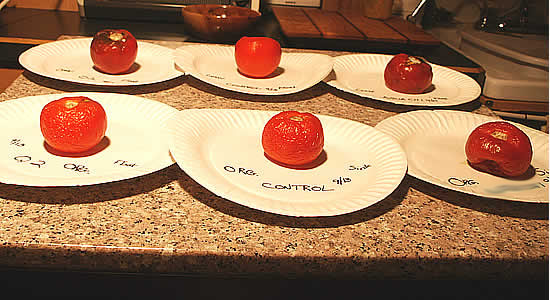 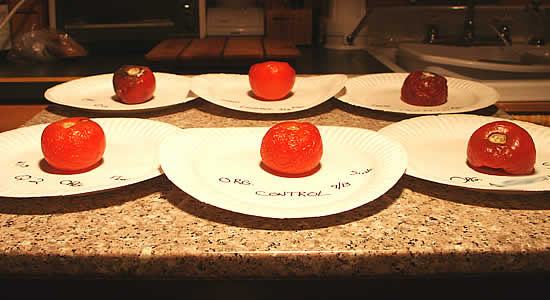 Now it is obvious that all the conventional tomatoes are collapsing, though the conventional Q is not collapsing so much as disappearing while it shrivels. The organics are hanging in there, except for the AC, which looks terrible. 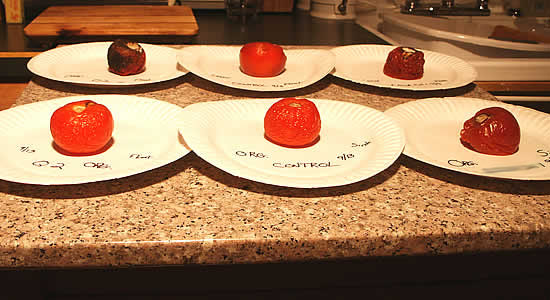 While all the conventional tomatoes have deteriorated well beyond a usable condition, there are some peculiar differences. For example, the control has the largest volume, and the Q the smallest. Yet as you shall see when we describe what was found inside these tomatoes, there is no correlation between a larger volume and health as there is in the organic tomatoes, which, except for the organic AC, are still intact and even fit for use. 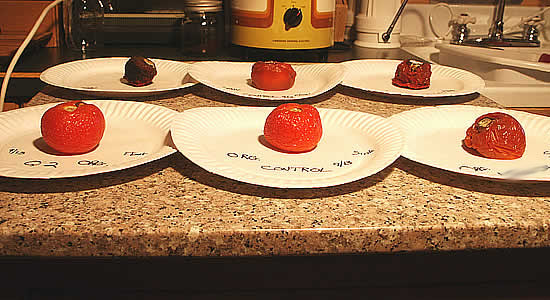 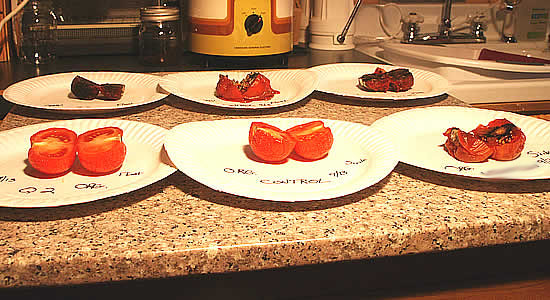 The inside was all blackened, interspersed with some white specks and areas of mold. 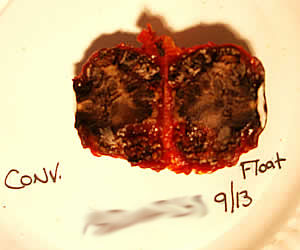 Spores puffed out as I cut the tomato in half. This one was full of mold with some blackened parts. 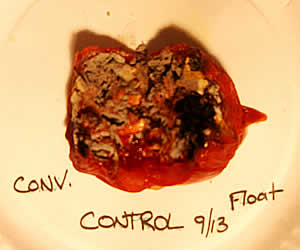 The inside was uniformly black and spongy, like a mushroom. There was no mold and seeds were clearly visible unlike the others. 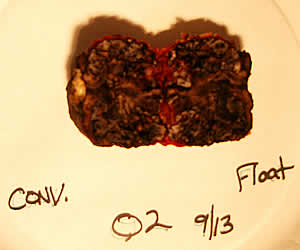 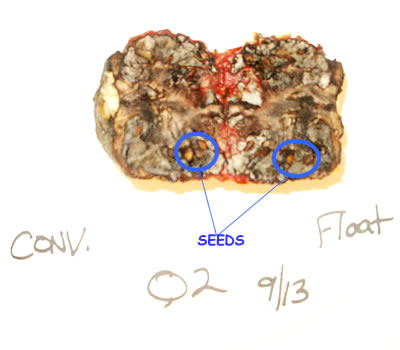 The core was hard and blackened, with the surrounding area putrefying. 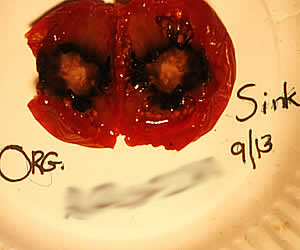 Small amount of mold on the exterior stem area, easily excised. The interior shows signs of losing firmness and fulness, but it is, otherwise, still fresh and usable. It goes into tomato sauce. 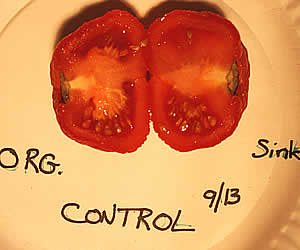 The exterior blemished area has no mold, and shows no influence on the interior pristine condition, which is plump and beautiful. Into the sauce it goes! 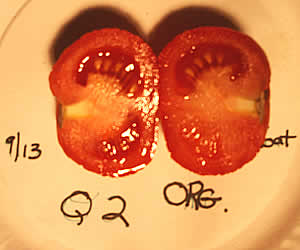 The results confirm something we have firmly believed because, firstly, we have so much personal evidence proving it is factual: The very first thing one should do is eat organically as much as possible. Without question the organic control tomato fared way better than the conventional control in this test, showing that, without any other influence, organic is superior in life-force to conventionally grown produce.

A clue about why this is so, which we did not appreciate at first but recorded, because it seemed noteworthy, was that the conventional tomatoes all floated when placed into the tubs of water, whereas only one of the organic ones did. Floating is a sign that there is a higher proportion of water in the tomato compared to nutrients. Sinking is a sign, therefore, of nutrient density. The conventional tomatoes were grown in such a way to attain volume with a higher proportion of water to nutrients.

This was demonstrated by the more rapid and complete deterioration of the non-organic, conventional tomatoes, regardless of treatment. Such deterioration is an indicator of lower nutrient density. It is a simple matter why this is so: Conventional agriculture generally puts back into the soil only three or four nutrients, though over 90 nutrients are depleted with the production of a crop. Organic agriculture, if practiced properly, strives to restore all 90+ nutrients back to the soil in a balanced fashion. The resultant nutritional density is the key to non-chemical aided storability.

Fruit with ideal nutritional balance and density will not rot but rather simply shrivel up and dry around the seeds. This ideal was beautifully demonstrated in the organic control and organic QEnergySpa, BEFE tomatoes. If this is not reason enough to eat organic, it must also be considered that organic food does not have literally dozens of different pesticides applied to it, many of which are widely established carcinogens. Organics are also non-genetically modified. Few people realize it, but a very large percentage of conventional tomatoes are genetically modified.

It just makes sense that injecting wholly unrelated genes and putting chemicals on the food you eat, while treating the soil with isolated elements rather than the full complement God made for the sustenance of life, is short sighted and foolish. Look at the pictures and ask yourself, “Would I rather my body was an organic or conventionally grown tomato?” Going conventional, the outside may look good for a while, but so what if death is spreading from within and overtaking all goodness in short order?

While all three conventional tomatoes deteriorated, the manner in which they deteriorated and the end results leave us with an interesting thought. It appears that the QEnergySpa, BEFE treatment, while not adequate to forestall the collapse of the conventional tomato, provided energy sufficient to be used in the preservation of its seed as you can see below

. The purpose of fruit is to provide a means of propagating the plant, and, in this sense, the QEnergySpa, BEFE was successful, because it appears to have best preserved the seed of all three conventional tomatoes. Of these tomatoes, only the one treated by the QEnergySpa, BEFE had no mold and the seeds appeared healthy. Were we to duplicate this experiment we would spend more time evaluating this aspect.

The principle of life-conserving energies operates with any kind of health treatment. An effective device like the QEnergySpa, BEFE will not perform a miracle beyond the laws of nature. It will assist the natural health processes, which are geared to maintain life. If one is lacking essential nutrients and struggling with the impact of toxic chemicals (as a result of conventionally-farmed products), the living systems become weaker and more vulnerable. The first order of business is to restore what is naturally needed and supportive of life.

The organic tomato, having more nutrients (depending on how organically it was grown, the condition of the soil, and the variety) and less stress from a relative absence of toxic chemicals, was able to utilize the energy from the QEnergySpa, BEFE to maintain a more healthful condition. (It is interesting to note that the organic tomato treated by the Q had the lowest nutrient density of the three, yet fared the best, telling us that the effect of the treatment may have added more benefit than even what is seen in the side by side comparison.)

What this means is that effective therapies or treatments will enable superior health only if you are doing the right things for your health in the first place, supplying your body with what it needs and not stressing it with what it doesn’t. Otherwise, you can get benefits, but sooner or later the laws of nature and physical realities will catch up with you.

As for why the organic Attempted Copy tomato rotted while the control did not, it is our thought, based on other observations with people using these devices, that imitation machines create energy waves that cause the body, or tomato, to dump valuable minerals, particularly calcium. Calcium is needed to retain vitality and favourable storage properties in fruit and vegetables, not to mention being important in human health. We had one woman using another device, the Bio-Cleanse (formerly Ion Cleanse), who had the sudden appearance of varicose veins after using it. Upon calling the company, they told her to stay off the machine for six months and to beef up her mineral intake.

The QEnergySpa, BEFE does not have this harmful effect on the body, but rather helps it retain what is needful and lose what is not, thereby enabling it to maintain itself at a higher level. We all should do likewise.

Our focus is on increasing energy by patterning the field of energy to balance, harmonize, and elevate the bioenergetics of the individual. Competitive machines excel at making the water dirtier and causing people to focus on what is in the water. Copycats promote maximum creation of electrolytic precipitation of dissolved solids, electrode action, pollutants and additives in the water, affecting the color of the water.

Please note: Future Life Science have suffered a few setbacks as of late. Flooding continues to cause issues. Progress on the NEW Q6000 model has been delayed in part due to the covid flu in reference to the last supplier needed and due to the flooding. Please expect delays on all orders. Dismiss